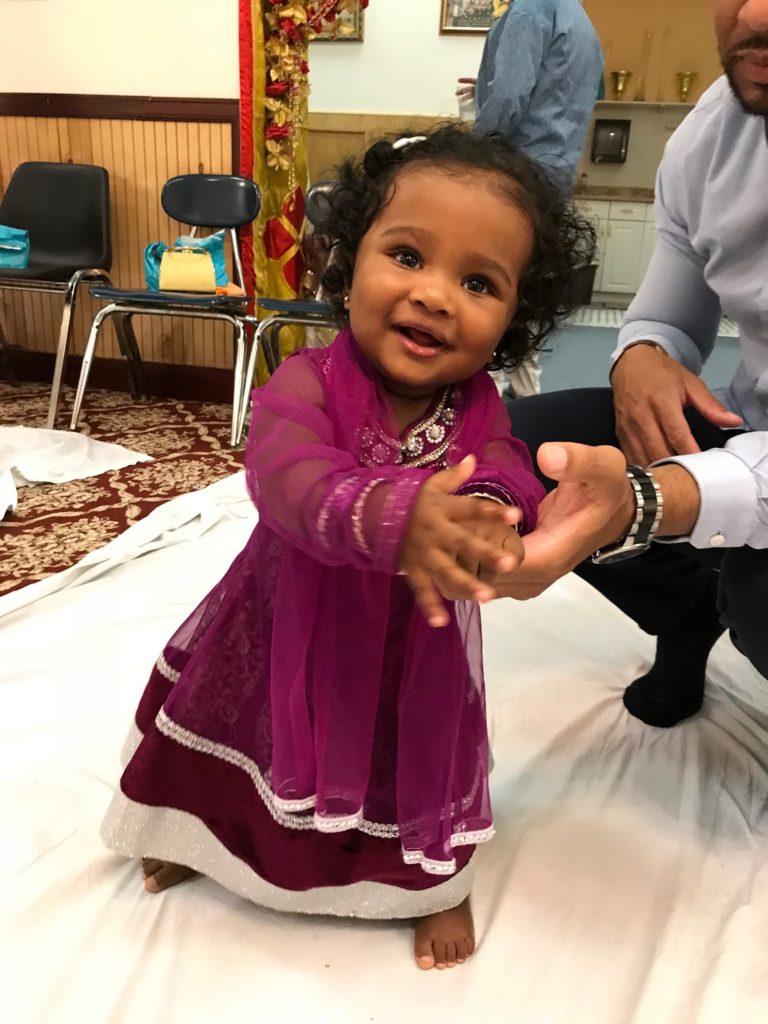 I can’t believe our little girl is turning One already.  Where did the time go?  In honor of her first birthday, I thought I would share my Birth Story.  It was such a positive experience and I want other woman to know that labor doesn’t have to be scary.


Yes, my labor experience was magical and I truly enjoyed every moment.  It felt so amazing to know I was pushing out my daughter.  My active labor was great and happened on a Friday but before I even began to push, I must start with my doctors appointment that was scheduled for the Monday prior.  I went for my usual appointment on Monday morning and was due for another 2 weeks.  The doctor asked me if I slept the night before which I thought was odd.  I was very fortunate and didn’t have any trouble sleeping during my pregnancy.  He asked because he checked me and apparently I was already 3 centimeters dilated without even knowing it.  I hadn’t felt any contractions. We were shocked and at that moment, I realized that I could give birth any day now.  We left the doctor’s office but I went into work anyways, mainly because my doctor’s office is close to my work.  My doctor had me come in the next morning and I found out I was 4 centimeters dilated.  Now I felt positive that I was giving birth that Tuesday night.  Later that evening I finally started to feel contractions but they were staying five minutes apart and not getting closer.  Also, they were bearable for me and I wasn’t sure if these meant I should head to the hospital.  I called my doctor and he said that since I was able to bear them, that I should try going to sleep to see what happens.  I went to bed and ended up falling asleep.  I woke up feeling fine and went back to the doctor.  This went on for another two days and by Thursday, I was frustrated, to say the least.  I was going to my doctor twice a day and having contractions but no baby!  It turned out that I was having prolonged latent labor.  Of course my little angel would make me have contractions for days before even arriving!

All week during my contractions, I was giving them a pain rating from 1-10 to determine if these were “it”.  Everyone says you will know when its time to go to the hospital.  I kept asking my doctor how will I know!  He said she will send me a text, lol!  Thursday evening, I left my doctors office and he now said I was 5 cm dilated and I knew that this actually might be the night!  Once we got home, I began feeling contractions yet again. This time though, they got stronger and stronger and stronger.  These were finally a “10” on the pain scale and they also became the “on your hands and knees” pain.  I was hesitant to head to the hospital especially since I had been having contractions all week and didn’t want this to be a false alarm.  My husband immediately took over and said we were going to the hospital now.  We got into an Uber and headed to Beth Israel hospital around 10:20pm. The poor Uber driver was a young man and I know he was freaked out.  He was driving so carefully, it was very sweet.  We arrived at the hospital and the triage doctor checked me and said I was only 4 cm!  Whattt….now I was really frustrated because I thought I was already 5 cm but they informed me that each person will have a different interpretation.  They also told me that I couldn’t be admitted at just 4 cm but I could leave and walk around to see if it will help me dilate more.  The other option was to get the epidural right away, which would allow me to be admitted.  At this point, the contractions were coming on quite quickly and strong.  I couldn’t even imagine trying to walk in that pain.  I talked it over with my husband and I decided to go ahead and get the epidural!

BEST DECISION EVER!!!  So now its about 10:45 pm and I began the admittance process.  Afterwards, I was taken to my delivery room.  I had to get a certain amount of IV before I could get the epidural administered so we began with that.  By 12:30 am, the doctor comes in to administer the epidural.  I was nervous because I expected this to be painful but I knew it couldn’t be as bad as the contractions I was feeling.  They had me sit up and wait until my contraction ceased.  To my surprise, I only felt a pinch and then a bit of pressure in my back.  Within minutes, the epidural started to take effect.  I was in heaven, it was the best feeling ever and I kept telling the nurses how amazing it was.  I kept repeating…”this is amazing, why doesn’t everyone do this?”  I think they were secretly laughing but I was so happy to to no longer feel those contractions.  I only felt slight pressure and I a bit of itchiness all over my body from the epidural but I’ll take that any day over those contractions.  So now it was 1 am and the doctor on site checks me again to see if I have dilated any further but I was still at only 4 cm.   The doctors at the hospital had ongoing contact with my doctor and he recommended them breaking my water to see if that will get things moving.  Luckily for me, I was not feeling any pain so when they broke my water, all I felt was a gush of water.  They said it usually takes about an hour per centimeter to dilate so I figured it was going to be awhile before I even begin pushing.  They told me to just try to get some rest since it may be awhile.  This was perfect to me because it was a little after 1 am and I was tired anyways.  I immediately fell asleep.  After two hours I woke up and noticed that I was really feeling the pressure of the contractions more.  It wasn’t painful but I noticed that the pressure had become more intense in the last hour.  I called the nurse to let them know and the doctor came in to check me again.  To her surprise and everyone else’s…I was fully dilated after only 2 hours!

I was so excited to hear that I was fully dilated.  It was 3 am now and they called my doctor and he headed over to the hospital.  My nurse was so surprised, she told me she didn’t expect to still be on her shift when I gave birth.  My doctor arrived and had me push one time to get an idea of how far along I was.  Afterwards, he told me to go ahead and rest for another few hours and let the contractions do the work.  He said this was better than having me push for hours and instead I will be able to just push for maybe 30 minutes.  So I could basically take another nap???  Sounds good to me.  I rested for another two hours and at around 5:30 my doctor came back in.  He exclaimed… “let’s have a baby!”  Now I also want to mention that the atmosphere the entire time I have been at the hospital was so calm and serene.  Everyone was calm and gentle and that lent to me being calm and comfortable as well.  Originally I had asked my husband to create a playlist of Miami booty music (yes, I am so from Miami) for my delivery but when it came time to actually push, I didn’t want any music.  The atmosphere was relaxing and soothing, that I didn’t want to disrupt it.  I did start singing Uncle Luke songs in my head while I was pushing.

In the delivery room, it was just my husband, my doctor and one nurse.  It was perfect, that is just what I wanted.  I began to push when I was having a contraction and my doctor coached me all the way through.  After each push, my doctor would let me know I was doing a good job which just kept motivating me to keep pushing.  All these movies with woman giving birth gave me the wrong idea of what happens.  I imagined my doctor yelling at me and screaming at me to push!  It was the complete opposite.  He coached me as well as the nurse.  He was always calm with me and we even made jokes during the delivery.  My husband, the joker, kept asking where the sheet was, like in the movies?  He wanted to know how come he was so close to the action, oh boy…only my husband.

So after thirty minutes of pushing, our Chloé was born!  The doctor looked at me and said, “Grab your baby”  He then threw her into my arms!  It was magical!  I can honestly say that I enjoyed my labor experience.  My doctor is amazing and I am so happy to have found him.  He was always in contact with the staff before he arrived and they told me everything they were doing each moment along the way.  He made me feel comfortable and I completely trusted him.  I will never forget this experience!  We welcomed our little Angel on November 18, 2016, at 6:18am.  She weighed 7.1 pounds and measured 19.5 inches and I enjoyed every minute of giving birth! 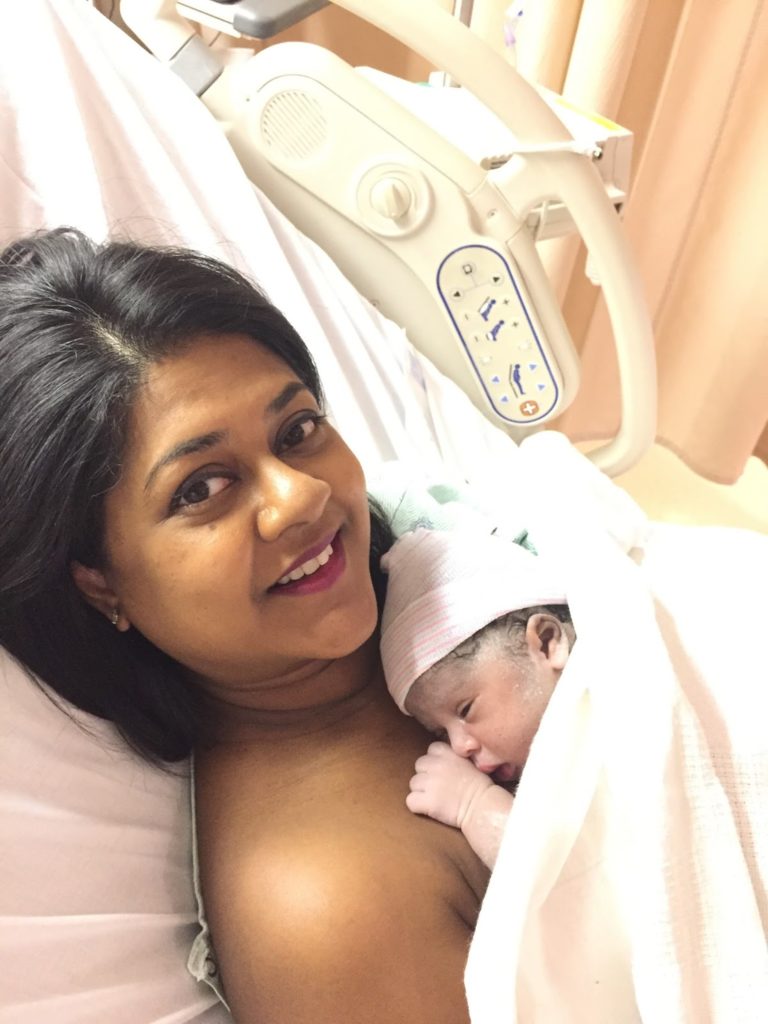 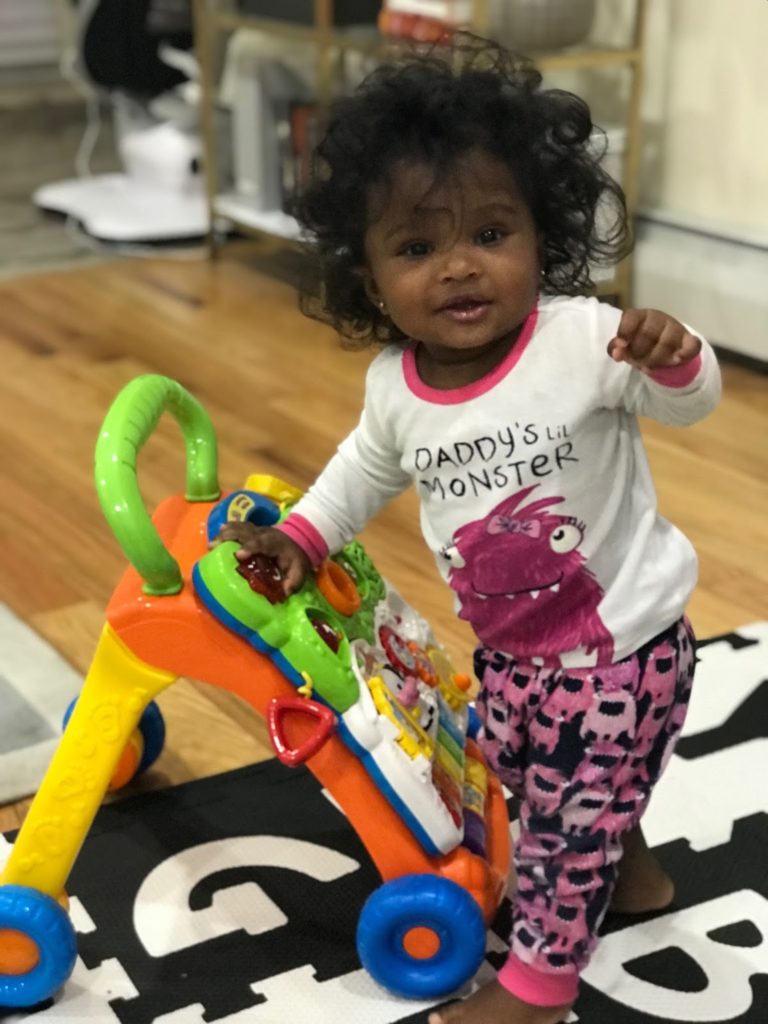 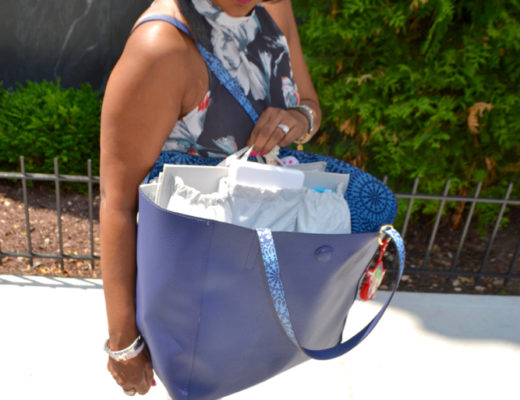 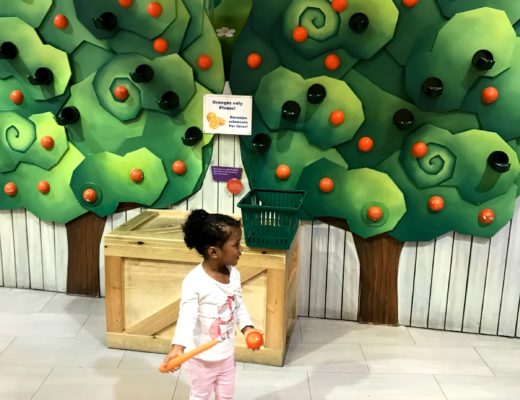 Fun Things to do with Kids in Miami 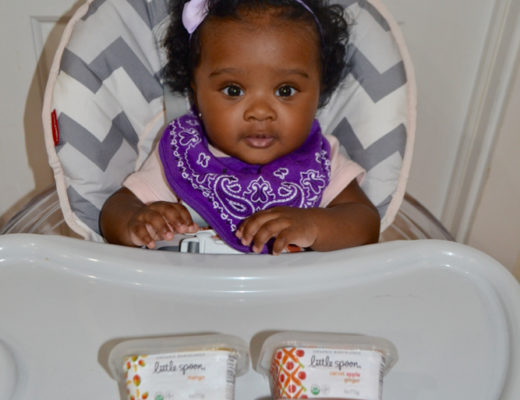 July 20, 2017
Previous Post Girls Night Out in my Over the Knee Boots!
Next Post Not your Ordinary diaper bag